Note: Marianne shared the following write-up with me after Day 4 (of 5) of my Latin language lab at the Agen Workshop that concluded yesterday. I found her observations to be both encouraging and practical. I have added several links to help you find more information about the things she mentions. Enjoy!

I got hooked on Justin Slocum Bailey’s lessons after stepping over the Latin doorstep on Tuesday. With the magic word ‘salve!’ (“hello!”) and his irresistible big smile for every single person in the room, the class was ready to go. Divided into the groups “Romani” and “Barbari,” the students were following rapid TPR (Total Physical Response) commands. Nobody was able to follow them without smiling or laughing!

The class content was highly personalised and I could just feel how every student was loved, fostered and being transformed into a valuable part of the class. Almost every interaction revolved around the participants, their likes and qualities. For instance, one student was good at reading. For some reason a creepy fact got established: Not only was she good at reading books, she could also read the minds of other students in class! Justin’s facial expressions and dramatic skills made it true comedy to watch the student open another student’s brain and read it.

The beginning students heard many repetitions of the same constructions whilst remaining interesting. Justin does this by going extremely slow, using his body language and acting. He also positions himself in different places in the room, for PQA (Personalised Q&A) close to students, then back in the middle to address the whole class. His favorite position for brain breaks was to stand on top of the table, like a real magister.

Justin has a bank of brain breaks (like these, these, and these) to choose from and it seemed like he literally read the energy from the room to decide on the nature of the next brain break—either energizing the students or creating a calm atmosphere, usually through breathing exercises. An example of a calming brain break is the zombie brain break, where the students breathe through three long inhales and breathe out shortly, making a zombie sound. Not only does this trick the brain into being more alert and awake, it also creates a spectacular zombie scene in class! The students were held accountable after the brain breaks; it wasn’t just passing time. By checking in with them, he recycled the same constructions over again: “Who won? How many times did you play?” Justin also invited the observers in the back of the room to participate, which made me feel very included.

Justin uses several student jobs in his lessons. Some of them are very functional and some merely hilarious. Student A needed to scream loudly whenever Justin was going to write on surface using the wrong kind of marker. The executions of these types of jobs provided the class of short mini brain breaks with lots of laughter. He made the expectations for the jobs very clear. When other students began to help student A with the job, he responded ever so kindly: “Only student A can do this job; it’s her special job. But don’t worry, there will be other jobs!”

A job that everyone had was making sure the magister was comprehensible. Students used different gestures, for instance to indicate that a word was unclear or to slow him down. This put responsibility on students for their own Latin learning. Justin always praised students when they signaled and then took responsibility himself: “We never even wrote that down! Thank you for ensuring clear communication!” This specific praise fostered a very safe classroom environment. Aside from the students’ gestures towards the teacher, Justin’s own gestures were extremely consistent and precise. Many were borrowed from sign language but sometimes he allowed students to come up with their own. Once new words or constructions were established with a translation and/or a gesture, Justin used various techniques for comprehension checks, for instance, by asking the whole class for the meaning of a word.

Justin is a master at a skill that he calls ‘making lemonade’. To me it seemed like taking advantage of anything that distracts the class and might make some teachers frown and quickly move away from. For instance, the sound of the tower clock was referred to as ‘the hour of death’ (the class had been discussing a picture of a pig outside a butcher) and someone peeking into the classroom was ‘a spy’. If this doesn’t sound particularly funny or makes no sense to you, I strongly encourage you to go and see Justin doing this live in action!

It was obvious that in his speech, Justin is conscious of cognates and root words in various languages. He would always point similarities out or let the students discover themselves. Justin for instance covered up the last two letters of the word “invadere”. The meaning then became instantly clear for everyone, ‘to invade’. This word came up through PQA: Justin had asked which place the students would like to visit. One student wanted to visit or invade Argentina. The other students said she wanted to convert everyone in Argentina to the French language. Whilst asking this story, all the students acted out various parts, such as being the waves in the ocean or the residents of Argentina. Justin skillfully asked a variety of questions, from basic yes/no questions to more open-ended questions such as “What does this person think now?” This provided a nice challenge for those who were ready for it. At the end of the story, it turned out that the student really only wanted to visit Argentina, instead of invade. This was beautiful to see as this had been the student’s own original suggestion, which got honoured in the end.

Throughout the lessons, Justin’s board organisation turned out to be a dream come true for language teachers. Ever so neat were his posters, ordered by word categories and neatly colour coded. They were used all the time as Justin ‘strolled’ over there calmly to point to them. This gave the participants plenty of processing time, which I personally needed. Very often Justin would repeat the sentence with his melodious voice, perhaps the second time at a quicker pace. I started noticing that I could finish his sentences before he did, which showed me that I very quickly got used to the different Latin word order.

What was a very pleasant experience for me, and presumably for the students too, was that we were always told what would happen next or why we did certain activities. Justin would state: “Let’s activate our prior knowledge. I’ll give you some thinking time to recollect yesterday’s story.” OR: “This activity is your ticket to break time!” Something else that the students enjoyed was space for the students to ‘read and notice’ things about Latin after the reading of a co-created text, noting some patterns in the language, for instance spelling or grammar. He explained just a little bit about what students noticed, and whilst staying in bounds he looked ahead to some things they would learn in the future.

It was evident that all of the above described activities weren’t randomly chosen. They were all personalised, catered to the students’ needs, built up a safe space and used the same vocabulary in a variety of ways. This ensured that by the time the students got to create a story, they could already successfully process or even create with the Latin language! Not even to mention the success they experienced in reading the Latin text. As Justin praised them for how much Latin they had been able to put into a co-created story: “I want to see from your eyes the blast from the wall of text on the board!” 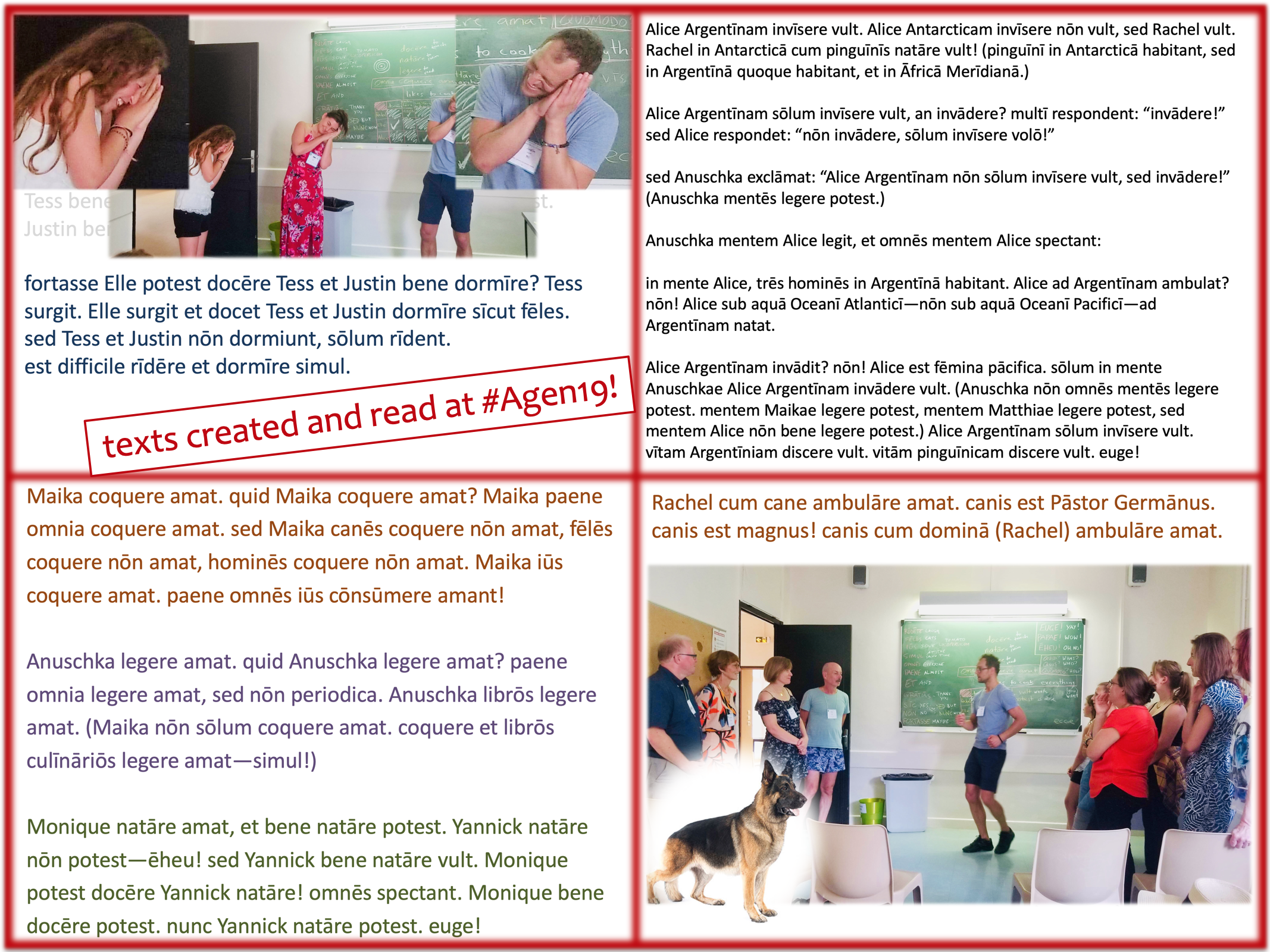 Justin is the absolute king of creating ‘flow’, a timeless zone where we observers forgot the extreme heat in Agen. It is apparent that he enjoys being with the students and his passion for history really gives the lessons another dimension. I can just imagine how his students will fall in love with the Latin language.

It is so inspiring to meet a language teacher with this impressive toolkit: classroom management, comprehensibility, calmness, sense of humor, charisma and positivity. Luckily, Justin assured us that there’s nothing mythical about him: almost all of these skills can be isolated and practiced one at a time, with the help of a colleague observing. This was very reassuring for us as language teachers. And we might not be as witty or dramatic as Justin, but if we get really good at being comprehensible and skilled at using different techniques, our personalities can enhance our teaching. What a great message to close off with!