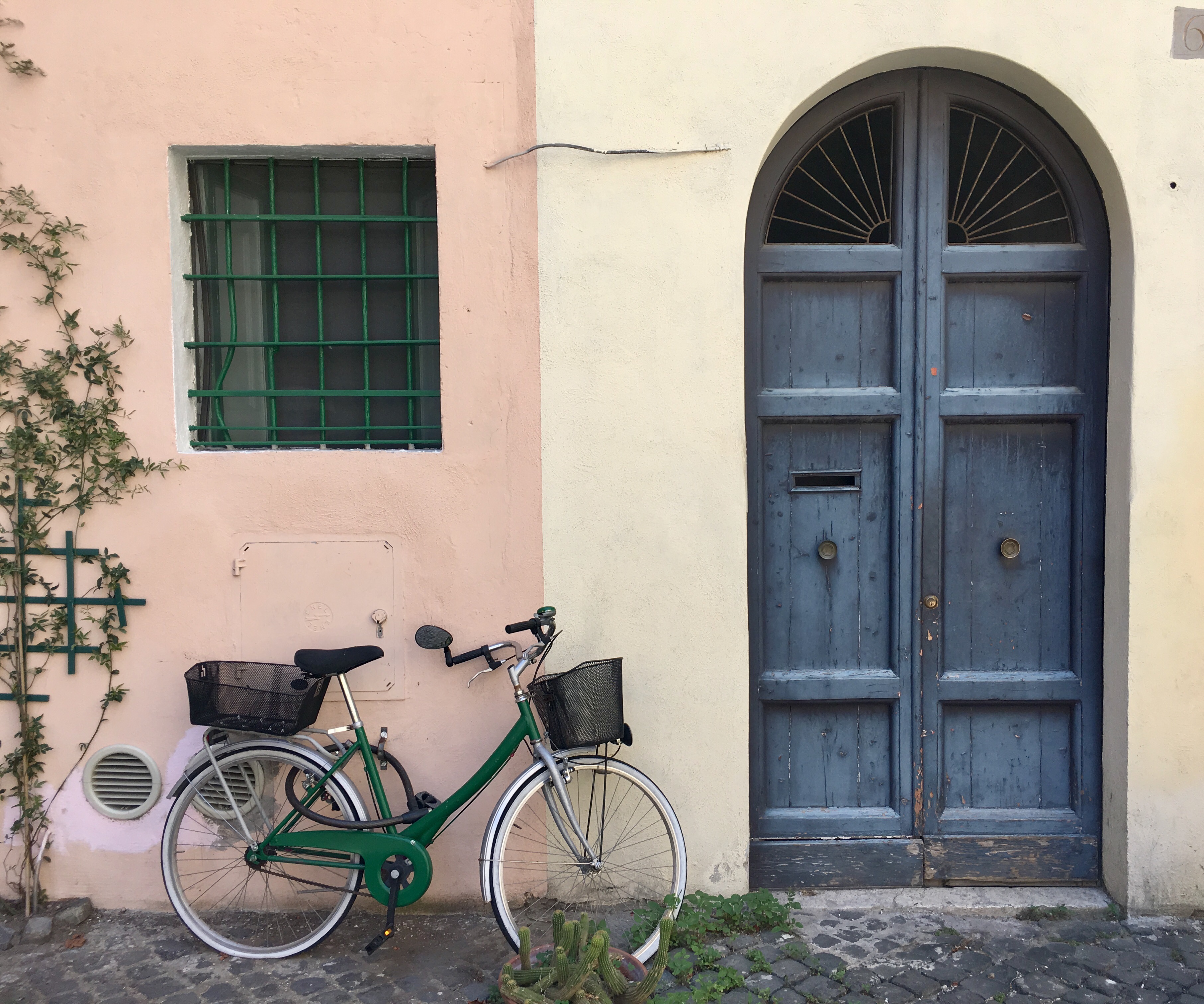 I arrived in Italy yesterday for a six-week teaching gig, and, yes, I actually took the picture of that door, and, yes, it actually leads to our flat, and, yes, the bike was already parked there. Che bello!

As with other times I’ve traveled recently (see here, here, and here), I want to share some language-learning observations and tips from this trip, but, instead of unloading them all at once, I plan to release them in installments. This first one is about the Human Factor in using people’s own language with them.

What happened on the plane

I had just settled into my row, which had finally been confirmed as indeed my row by the closing of the aircraft door with two empty seats next to me. Then they re-opened the doors to accommodate a group arriving from a delayed flight. A harried family made its way toward my row, the two daughters in the lead, their parents improbably far behind. When it turned out not only that three of the family’s tickets were for my row, but also that one of them was for my seat, the parents and a flight attendant went off to wherever one takes care of these things, leaving me behind with two seriously stressed kids, the older of whom, perhaps aged ten, was valiantly trying to figure out what to do with the family’s too-many, too-big carry-ons.

I was happy to help, so I offered in Italian. (Hai bisogno di aiuto?) Rarely have I seen a face turn so suddenly and thoroughly from distress to it’s-gonna-be-okay. The relief didn’t even fade when she expressed how glad she was to have found a fellow Italian and I said I wasn’t Italian, I just spoke a little. Anyway, there ensued much camaraderie among nearby passengers rearranging their stuff to stow the family’s, and there was much rejoicing in Italian, and I was moved up to a more leg-roomy seat, and a flight attendant said she wished they had an extra uniform so I could help out more, and then we flew for a really long time. But it will take a lot longer for me to forget the change in an Italian girl’s face when I addressed her in own language in the United States. 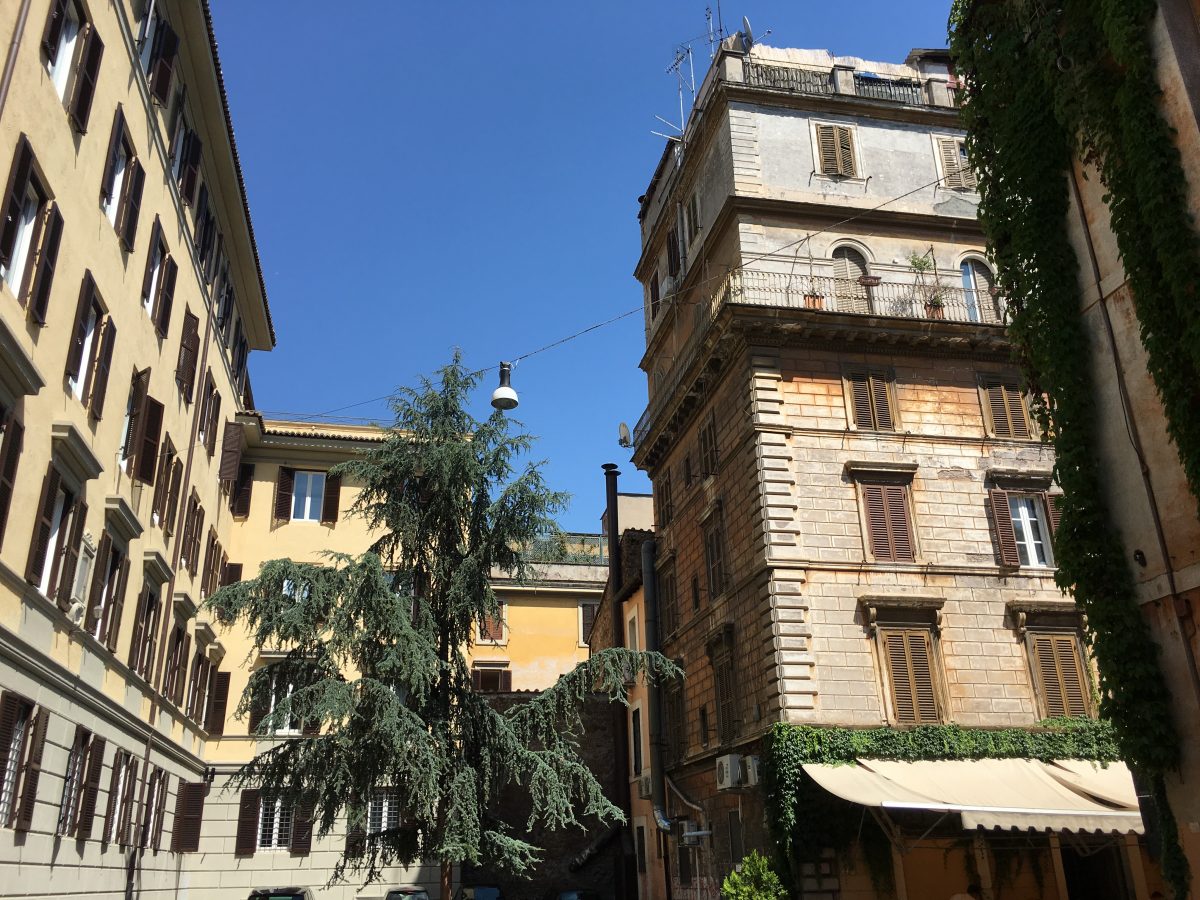 the courtyard viewed from that door

What happened in the taxi

The Paideia Institute had been nice enough to arrange a car service for me, so I got to see a guy holding a piece of paper with my my name when I emerged from customs, which has happened only a few times and always makes me feel like things are getting serious. It turned out my Italian was better than his English–I learned that he, Gampiero, had only become a driver last year after 31 years in ship-building, and that the switch to a service industry had occasioned his finally trying to learn English, but that he hadn’t gotten very far–so we spent the hourlong drive through morning rush hour in Italian, chatting about everything from retirement funds to European politics to how the roads in Rome are still better than roads most anywhere else.

The truth is, he did most of the talking and I understood about 60% when he got on a roll, more when the conversation was more back-and-forth. He had what I think was a thick Roman accent (he was proud to have been born and raised there) and it didn’t seem to cross his mind to speak slowly or check for understanding. But I loved listening, and when I answered or asked a question or told a little story, he never once seemed to have a problem with how I said it. No, it wasn’t magical and we won’t be staying in touch, but there was a deep human connection as he got some things off his chest, praised the city of his birth as compared to all other cities in Italy, and shared without shame that he had always found language classes boring. I don’t think all that could have happened if he had had to try to communicate everything in English.

These two incidents, along with a few others that I may relate later, reminded me of one of the reasons I love learning languages: because of how good it is to speak with people in their own language, whether in their own country or another.

Have you had an interaction in a language you were learning that highlighted the Human Factor?