My French is not what it once was. This makes me sad. Here is the story of what I’m doing about it, with some encouragement in case you, too, want to revisit a once known language. 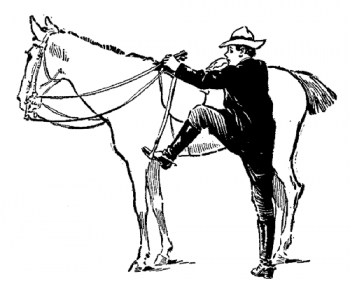 It’s hard to get back on le cheval.

My first regular contact with French was in third grade, with a Swiss teacher in an Austrian classroom, in the classic 1980s immersion setting in which the only language uttered was the target language, regardless of whether any of the students understood what they were hearing, or, indeed, what they themselves were saying. The two main activities were singing songs (“Le coq est mort,” “Alouette,” “Sur le Pont d’Avignon”) and repeating sentences after the teacher. Something must have stuck, though: by the time I moved on to gymnasium (college prep school) in fifth grade, I was quite at ease hearing and uttering French, although that didn’t stop me from getting mediocre grades in spite of cheating on vocab quizzes.

My pursuit of French continued after moves to Canada and the United States, culminating with the Advanced Placement (AP) exam, on which I comfortably scored a 5 in tenth grade. I still remember the essay prompt, which asked what I would do if I were invisible. (My response hinged on two sub-issues, viz., how easily I could toggle between visibility and invisibility, and whether becoming invisible would include becoming incorporeal, so that I could do things like go through walls.)

I say “culminating” with sadness, because I never took another course in French language or literature at any level, even though I found the language thrilling. French hasn’t been absent from my life: I worked briefly for the University of Michigan’s Services for Students with Disabilities as a note-taker in French courses, I set one of my homepages to the French news, which I read on and off, I’ve visited France several times and enjoyed being able to get around, and I’ve read some books in French. My wife spent a semester in France and we watch French films. But the fact is that my French is worse than it was fifteen years ago.

I recently decided I was tired of this. Here’s what I’ve been doing about it:

-15-20 minutes a day with duolingo. I don’t think duolingo is that great–I may explain why in another post–but it’s not bad for re-encountering forgotten words, and it’s easy to make a daily habit.

–Rereading Le Petit Prince. I read it once as a kid and once just after college, but it has a lot of rereading value, and I can read it Extensively, i.e., many pages at a short sitting, without looking up many words. As a primo treatment of nostalgia, it’s also a fitting companion as I return to a childhood pursuit. This time, I’m not just reading it again, but also rereading any given chapter a few times in a row before moving on to the next, for reasons indicated here. I’m excited to watch the 2015 movie!

-Browsing the internet in French.

Here are some other things I hope to do:

-Reread Candide. I read and enjoyed it in French in high school, and I’ve read it many times in English, which makes it a good candidate for Extensive Reading.

Further reflections on and encouragement for relearning a language:

1. If you really acquired the language in the first place, what you are doing is not so much relearning as reactivating. Your competence in the language hasn’t disappeared outright. It needs to be reawakened. I’ve found this time and again during the first few days in a country whose language I haven’t spoken in a while. Pretty soon I’m saying things, without having to plan them, that I know I haven’t heard, said, or thought about in years. For me, this is one of the most exciting occurrences in all of polyglotism!

2. It’s normal for your comfort and performance in a language to fluctuate. This goes for any language, including your first, and can be supremely frustrating, even if you expect it. My sister, who was born and raised in Vienna and speaks German with a delightfully distinctive Viennese accent, now lives in New York and rarely speaks German. She experiences deep pain when she struggles to come up with a German phrase or to flow through a German novel. Like many Third Culture Kids, I experience similar frustration. I’ve been mistaken for a local, by locals, in Italy and Israel (one of my all-time favorite travel incidents was a long Italian conversation in which I unsuccessfully tried to convince a gentleman in Assisi that I was not Italian), but could barely hold a conversation in Italian or Hebrew now. I have to force myself not to react to this by spending a bunch of time on these languages without a specific goal or occasion in view, because I can’t justify doing what it takes to maintain a high degree of proficiency in 8+ languages. I have to rest in the facts that (a) how well I speak certain languages isn’t the essence of my identity, and (b) I can reactivate a language when it’s time to use it again.

3. As with any language-learning endeavor, do what you can. There’s no rush, and there’s no need to discourage yourself with materials that you “should” be able to handle because you used to be able to, but are too difficult for you now. Find some things that work for you–that are easy enough and interesting enough–and go with those. (For ideas, see On the Go, In the Language and Essentials For Language Learners.)

5. If there is healthy nostalgia in relearning the language, as there is for me with French and for many people with a language in which they were raised, try to enjoy that aspect of the pursuit instead of mourning what could have been if you had never drifted away from the language.

6. There are lots of reasons for relearning a language. In fact, there may be more reasons for relearning a language than for learning a new language: first, all the same reasons apply, and then there are additional reasons such as nostalgia and taking advantage of time already spent on a language. (Of course, an individual learner may have reasons for avoiding a previously known language, for instance, if there are bad memories involved, but that’s another story.) If you have a reason that’s good enough for you, go for it!