It wouldn’t be unfair of you to ask why I read a letter this morning written to someone other than me, or why I did so twice, once silently and once aloud, or why these were the fifth and sixth times this week that I had read this same letter.

“Curiously enough, one cannot read a book: one can only reread it.”  So claimed Vladimir Nabokov, on whose work I wrote my senior thesis some years ago. He continues, “A good reader, a major reader, an active and creative reader is a rereader,” and goes on to defend this claim on the artistic grounds that, in order to enjoy and evaluate a book properly, one must be able to experience it as one experiences a painting, outside the linear passage of time, which one can do with a book only once one knows all its parts well enough to consider them as a simultaneous whole.* 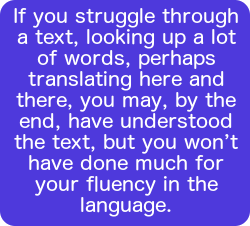 Re-reading is of value not only for art-critical purposes or for the wonder of returning to a beloved book after a long interval.  There is also the wise language learner’s habit: rereading a text on the same day or on several consecutive days.  There may be no better way for a language learner, once she has achieved a minimal level of proficiency, to obtain meaningful, understandable input in the target language, and there is almost certainly no better way to lock specific turns of phrase into one’s mind.

One of the reasons such rereading is effective is that, while it may be rewarding to work one’s way through a difficult text, the real language acquisition comes from then rereading the text so as to understand it in “real time.”  This may not happen until the severalth time through, but it’s important to realize that it is not until one is able to read a text, with understanding and at a decent clip, that efficient language acquisition is taking place.  If you struggle through a text, looking up a lot of words, perhaps translating here and there, you may, by the end, have understood the text, but you won’t have done much for your fluency in the language.

I have found that rereading, along with its paramour, relistening, has been the single most potent factor in my acquisition of Latin. Currently, I am rereading the letters of Seneca to his protégé Lucilius—not only reading them again after having read them some time ago, but rereading the same letter several days in a row: For a week, I read the same letter over again every day; the next week, I read the next letter every day, and so on.  Every Friday, I record myself reading the letter aloud, so that I can listen and relisten to the letters, usually while driving or doing chores.

I am also reading and rereading the five-act comedies of the Roman playwright Terence, according to the following scheme: on Days 1 and 2, I read and reread Act I, on Days 3 and 4, I read and reread Act II, and so on.  When I’ve finished the play this way, I reread the entire thing, so that I’ve read through the play three times after two or three weeks.  If the text were harder for me to understand, I would read each section even more times.  My basic practice is to reread a text however many times it takes for me to be able to read it “full speed,” and then read it at least once more.  (In some cases, as with Seneca’s letters, understanding comes quickly, but I still reread several times in order to thoroughly internalize not only the language itself, but also Seneca’s style and thought.)

When I told a friend about my rereading habit and mentioned a particular book whose 35 chapters I had read about fifteen times each, she said, “You must be pretty patient.”  I’m not.  My motivation for rereading is precisely that I don’t like to waste time.  From the perspective of second language acquisition, the only way to waste time reading is to read a text exactly once.  If you never touch the text, you won’t waste any time.  If you read the text many times, your fluency will skyrocket.  Lots of language learners waste time by struggling through texts that are too difficult for them or by immediately moving on from a text without having absorbed much of its language or content.  By rereading, you ensure that a text does all it can for your fluency, and that all the time you spend reading actually translates into increased fluency.  (Note that, outside the realm of language acquisition, there might be lots of reasons to read a text exactly once, e.g., to gather news, to say you did, or to learn that you never want to read it again.)

So, find a text you think you might enjoy reading multiple times, and do it!

Next time, I’ll share a more active spin on rereading, Three-Reading, that can be used as a recurring assignment for students.

For related ideas about Extensive reading, check out this article.