I don’t have the best party tricks. My elbows and one thumb are double-jointed (see GIF), but I haven’t parlayed that into on-demand entertainment. I don’t do any good impressions. I can’t fold my tongue into a swan shape, although I can fold a hand towel into something like a Cornish game hen (picture below, video here). Like my father and grandfather, I can kick the top of a standard door frame without my other foot leaving the ground, but most people prefer footprints to remain on horizontal surfaces, and the last time I did it in socks, my standing foot slipped embarrassingly and I had to play off the pain of my bruised tailbone and ego.  (There is money in door-frame-kicking: my 5’5” grandfather used to make some off fellow sailors’ betting against his ability to do so when he was stationed on the USS Belleau Wood in World War II.) If pressured to perform a party trick, I usually do the splits, which many viewers find more disturbing than entertaining, or tell a spoonerized story (one where lirst fetters of wonsecutive cords are swapped).

Believe if or not, though, I have found value beyond entertainment in party tricks: they are a great source of conversation in another language. Describing party tricks can test one’s speaking ability, especially one’s ability to perform the valuable skill of circumlocution, because, just as the tricks themselves tend to use body parts and household items in unusual ways, so too describing them often requires enlisting common bits of the language in novel ways.

So see if you can describe your own or somebody else’s party trick in your target language, on your own or with a language-learning friend. In some crowds, the ability to do so might be a cool party trick of its own! 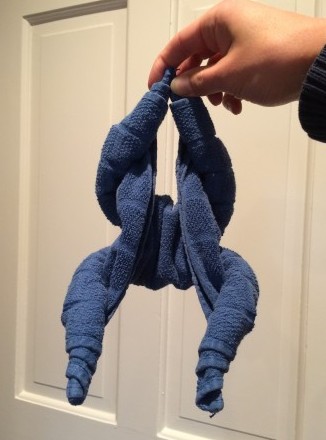 Variations:
1. Try to describe the same trick different ways—more directly, more elaborately, more scientifically,….
2. Try to describe unusual things you see performers do on TV, in youtube videos, or in your quirky everyday life.
3. Try to describe a not-yet-existent party trick and have fun seeing if you or someone else can perform it.
4. Create a database of target-language party trick descriptions for yourself and others.
5. If you’re in a group of people with the same target language, turn party-trick performance and description into a group game.
6. Create a tutorial video for a party trick in the target language.
7. If you are a language teacher, use students’ party tricks to create lessons. (The next post will focus on ways of doing this!)

For more ideas and rationales for little language-practicing activities, see On the Go, In the Language: Introducing #indwelli or search for #indwelli on Twitter.