I’m taking a sick day from skiing in Sun Valley. The upside is that I can finally write about windows, as promised in the last post, which dreamt of the ideal classroom. 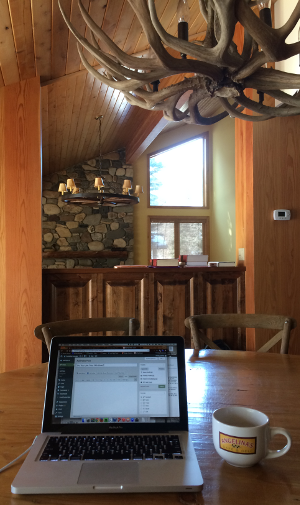 Through the window I can see one of my Happy Places–a snowy peak with a ski lift–from another: a quiet lodge with an oversize coffee mug and a different kind of window: “New Post.” You could see the peak, too, if my camera were better, although you couldn’t see the paraglider who just swooped through the frame, because I took the picture twenty minutes ago.

This post is about how to use your windows for language teaching and learning. It’s written from a classroom perspective, but if you’re an autodidact or you operate in a non-classroom setting, you’ll still be able to apply many of the ideas. If your setting is windowless, (1) I lament with you, having taught in a basement for several years, and (2) there’s still some windowy stuff you can do.

A recent classroom in which I taught overlooked an alley and a car dealership, with a view of a hospital, an intersection, and the sky. A lot of things happen in those places, and they’re all worth talking about in the target language. Leaving aside all the everyday happenings that are fodder for TL conversations, here are a few things we enjoyed through the window:

-Squirrels who frequently scurried along the power line about four feet from our windows, sometimes stopping to put on a show for us.

-A company picnic with live music in the car lot.

-A strange altercation between two guys in the alley.

-The Space Shuttle. Seriously: We had a perfect view when the Endeavor was ferried by a low-flying 747 to LAX en route to its resting place at the California Science Center.

Windows are a perfect source for opportunistic language instruction based on realia, because there tends to be a greater amount of stuff and a greater variety of stuff outside the window than in the room, and it’s all as current as can be. Also, stopping whatever else one is doing to talk about what’s outside the window feels like getting away from something, or even getting away with something, both of which are refreshing to students and teachers. If the window-gazing remains focused on using the target language, it’s still in line with our overall goals.

Aiming for the window

In addition to being on the lookout for opportunistic language instruction, which we always should be–some of the best material is up-to-the-minute news about students, the school, or the rest of the world, or anything that happens to be said or done during class–we can explicitly plan lessons that involve the windows.

Think of all the linguistic structures and registers we can involve in window-talk:

-What’s outside the window? What do you see?

-What was there yesterday? What’s different today?

-What’s the craziest thing you’ve ever seen through a window?

-Have you ever broken a window? How?

-If you were out there, what would you do?

-What if windows were illegal?

Then there’s all the stuff one can say about a window itself: material, size, shape, current state of openness or cleanness or intactness.

Windows are also good for routine conversations: Try starting class every day with five minutes of conversation about whatever’s outside. You’ll get tons of repetition of common structures, as well as the variety of whatever’s outside at a particular time, from passers-by to cloud shapes.

What if there are no windows?

Play pretend. I play pretend with students all the time. Not so much the textbooky kind where you simulate buying a train ticket from Lyon to Avignon; think more along the lines of “pretend we’re in a space ship that’s going down” or “pretend everything in the room is inside out.” Does this violate a commitment to real-life language functions? Not at all: Playing pretend is a real-life activity, and a widespread, fun, healthy, exciting one at that.

So, if I didn’t have windows in my classroom, I might do the following:

-Have students pretend there are windows and talk about what is outside.

-Have students create window-size pictures of what they want to see outside, hang these at window height, and talk about them.

-Project a picture and talk about it as though we were viewing the contents through a window.

-Bring in an actual window, set it up somewhere, and talk about it and what we could look at through it.

The physical and the metaphysical

There’s something trippy about windows, telescopes, glasses, cameras, and eyeballs. They are tangible items, but are simultaneously conduits of content about things other than themselves. Something about this gives windows a charm, subconsciously powerful even to our students, that sometimes approaches the uncanny. It’s no wonder windows have fascinated artists and thinkers from Hitchcock to Freud.