I am often asked what works in language teaching and learning. One of my favorite answers is “Whatever.”

When I evaluate a language teaching method or program, my basic principle is that teachers and learners should do whatever works, i.e., what is proven to be successful in achieving the goals of the program, which, for most language programs, emphasize proficiency in a language commensurate with the amount of time spent in the program.

But here I mean whatever works differently. I am actually claiming that what works best is, well, whatever.  Let me explain:

There are plenty of reasons to doubt that a syllabus structured as a sequence of grammar or vocabulary topics—three weeks on a certain tense, six weeks on uses of the subjunctive, two weeks on shopping vocabulary, etc.—is likely to lead to proficiency in a language.  (For a summary of the shortcomings of such an approach, see The Case for Non-Targeted, Comprehensible Input.)

Of course, even if anything will do, we still have to decide what to do on any given day, and whatever works can leave us with a type of choice overload or analysis paralysis. So, in this and some future articles, I will share a few easy (i.e., little preparation required) ways of selecting and using whatever.

Also check out this article I wrote for IJFLT, “Non-Targeted Comprehensible Input: How it works for my students and me,” for lots of ideas about how to use and (yes) plan for non-targeted CI. 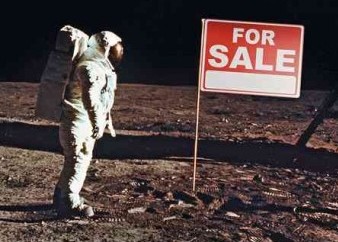 Whatever Works, Lesson Plan 1: The Man Who Sells the Moon

This sort of lesson relies on the News, but I call it Quirky Feature, partly because that doubles as a great sidekick name (“Hi, I’m J. S. Bailey, and this is my partner, Quirky Feature”).

Basically, you keep your ears peeled for a real-world story that pretty much anyone would find interesting. I’ve also put TAs in charge of this part of the process, which works well because it (a) reduces my workload and (b) is more likely to turn up something students find interesting.

Last year, I heard a story that was originally from the 80s, but became news again when the New York Times released an Op-Doc about it: A guy has made good money for the last 30 years selling plots of land on the moon.  Apparently, he is allowed to do this because there is no international law stating that he can’t. He also sells property on other heavenly bodies, including Mars. He has a lunar real-estate office with employees and makes extra bank around holidays because people buy extra-terrestrial property as gifts.

Who wouldn’t be willing to hear and chat about this for 15-20 minutes when they were in school anyway, especially if there were pictures involved?

So, what do you do with the Quirky Feature? The short answer is “whatever you want”—you probably already have ways you like to approach news or stories or readings or pictures—but here’s a simple sequence:

1. Project a picture of the moon or a planet.  Ask about it in the TL, Circle, Personalize, etc., everything from “What is this?” to “Who here has been to the moon” to “What would you do if you owned the moon?”, depending on what your students can handle.  This greases the gears, or, if you need to justify the activity to an administrator, “activates prior knowledge.”

2. Project a picture or two of the moon-realtor, maybe a real-estate sign on the moon—you can find these kinds of pictures online—and tell the story at whatever level is appropriate. This brings us to one of my favorite things about Quirky Feature: You can use the same one all day long, with all levels. Stop and ask questions along the way, if you want. Take questions and comments from students. Depending on their level, this can turn into a discussion that hangs out anywhere along the ACTFL Proficiency Scale.

3. From here, you have lots of same-day or multi-day options. I like to find or create a reading for each level based on the story I tell.  You can do this with little effort if you record yourself while you’re telling the story and have a TA transcribe, or you have a student type as you talk.  For your more advanced classes, you might be able to use the same online article from which you got your information in the first place.  You might actually be able to use that article for all levels, creating different versions by Top-Down Embedding.

You could precede or follow the introductory conversation with a dictation. You could have a timed write based on your telling of the story or the students’ reading of the story. You could have students re-tell the story to a partner, or have partners alternate telling tidbits about the story.  An advanced student could play the part of moon-salesperson and try to convince others to buy property. Another student could play a competing moon-seller. (The quirkiness of this role-playing makes it more enjoyable and effective than the understandably criticized role-play in which students pretend to order at a restaurant, ask for train times, etc.)

1. It’s not much work. You have an interesting story without having to invent material or look too far, especially if students are picking the stories for you, and you can use the same Quirky Feature for all levels.

2. You can do anything with the Quirky Feature story that you might do with any other story or text.

3. Unlike breaking news, it’s not time-sensitive. If you come across something interesting in the morning and you aren’t too excited about what you have planned for the day, just grab a few pictures and do Quirky Feature. If you’re in the middle of your best unit of all time, sit on Quirky Feature until you have a less-planned day. The Man Who Sells the Moon, for instance, is just about always equally relevant. It doesn’t matter whether a guy tried to sell the moon yesterday or twenty years ago; the fact itself is enough to hold interest for a little while. If you can time it with a lunar eclipse or a blue moon, great, but you don’t have to.

4. The few students who have a tougher time buying into your class might actually be drawn in more by something like Quirky Feature, where they feel they are getting away with talking about whatever instead of “learning.”  Of course, whatever works: they’re acquiring language if they’re tracking with what you and other students say in the TL.

5. If you need to for some reason, you can always choose to target certain structures, or say you did: The Man Who Sells the Moon could involve structures such as owns, is allowed, wants to buy, wouldn’t buy, as well as a zillion that can come with any topic: not X but Y, wonder whether, just like, you name it.

People sometimes ask me if I worry that an approach without explicit grammar units will let important grammar slip through the cracks. I don’t worry. If we are genuinely using, interacting with, and sharing content in a language for years, how could an important element of the language not come up? It’s not as though the content of the Quirky Feature limits the types of sentences we can use. We can talk about the moon at any level from Novice-Low to Distinguished.

It’s true that we still need to help students develop proficiency in linguistic functions such as those outlined in ACTFL’s Can-Do Benchmarks. But when it comes to selecting activities and sources that will build this proficiency, quirkiness and sheer compellingness are better indicators of usefulness than is, say, frequent use of a particular grammatical form.

I’ll share more “Whatever Works” lessons soon, including “Thank You, Justin Bieber,” “Not Today,” and “Frivolity Is the Mother Of Invention.”  I hope you find something useful! If you’re worried there’s a catch, see “What Makes Whatever Work: Essentials of any language program.”

And don’t forget to to visit the IJFLT article “Non-Targeted Comprehensible Input: How it works for my students and me.”