I love it. I aim for it. I teach for it. I travel all over presenting about it. It pervades this website. If I had a gerbil, this would be its name. But it also carries two bits of baggage that I wish could be lost in one of those airline warehouses where duffels go to die.

I’m talking about the third word in “Second Language Acquisition” (SLA), the formal term for both the study and the process of how people go from not knowing a particular language to knowing it. One bummer has to do with the implications of the word itself, which I’ll address in the next post. The other bummer has to do with the opposition of acquisition to learning popularized by Dr Stephen Krashen’s Acquisition-Learning Hypothesis, which I’ll address here.

Bummer 1: The Acquisition-Learning distinction can be used to misconstrue the position of people who teach for acquisition. 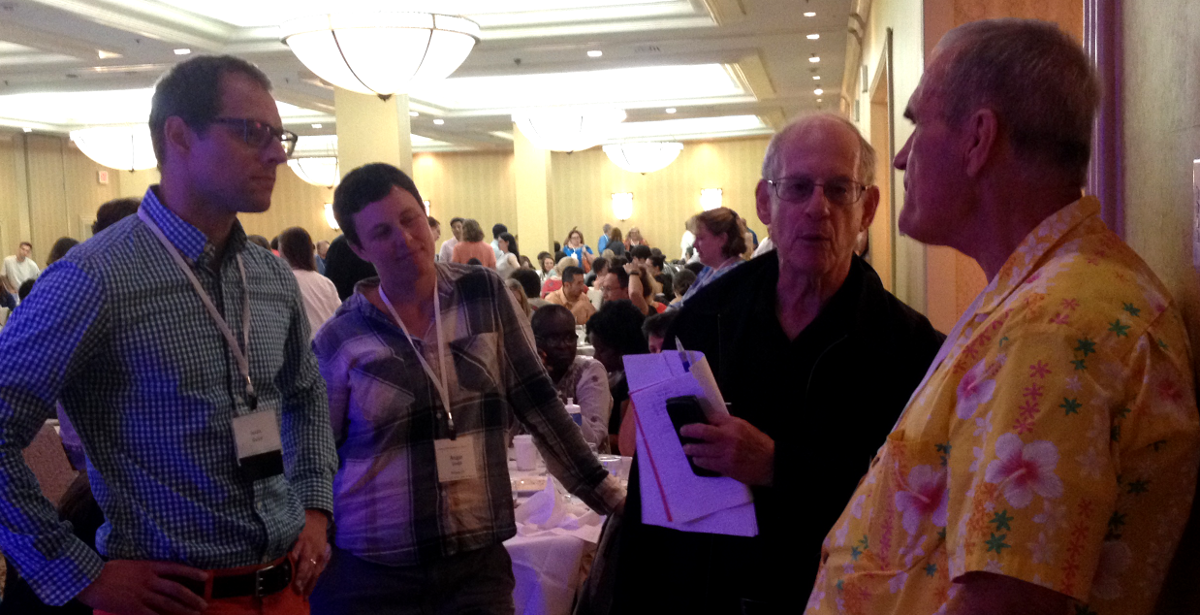 Eavesdropping on Dr Krashen at NTPRS 2015

In the Acquisition-Learning Hypothesis, acquisition refers to the effortless, subconscious process by which people “pick up a language,” while learning refers to the intentional commitment to memory of information about a language. In this context, learning may be an enjoyable endeavor for its own sake, but does not translate into acquisition. (This acquisition-learning distinction is not universally acknowledged or understood, which is why the term learning often appears on this site even to refer to the automatic process of acquiring a language. Cf. the opening of a popular introductory textbook: “[Second language acquisition] is the study of how languages are learned.”* Note, too, that Krashen is not the originator of the distinction, though he is its best-known articulator in SLA–see Eric’s superb comment below.)

The problem here isn’t so much with the term ‘acquisition’ as with the fact that ‘learning’ seems to be its opposite. This leads to frequent misunderstanding and even to conscious misconstruing. I have seen, both in email groups for teachers and on Twitter, statements along the lines of “Why would any teachers be anti-learning?” “What’s the problem with learning?” “I, for one, will keep helping my students learn. I’m a teacher, after all.” I have even seen the pursuit of acquisition as opposed to learning accused of being part of a larger trend toward anti-intellectualism.

No one who teaches for acquisition is against people’s learning stuff. It’s just that the two processes are worth distinguishing from each other, and the word ‘acquisition’ came to be used for one and ‘learning’ for the other. Neither term inherently means what it is defined as in SLA. In fact, the definitions could be switched and still make the same point: it wouldn’t sound strange to say “acquisition refers to consciously obtaining information about a language; learning refers to subconsciously internalizing a language.” In this case, we’d be celebrating language learning and pointing out that acquisition doesn’t cut it.

Every once in a while, I see what might be considered the opposite problem: a teacher whose practices take seriously the acquisition-learning distinction and promote what Krashen calls acquisition, but who happens not to know of or consistently use the term acquisition, is criticized by a teacher who is highly committed to the term. The criticized teacher is blindsided by the criticism, because she was simply using the face-value, lay definition of learning, which she has every right to do. It’s sad when this happens, because it unnecessarily distracts from the actual conversation, or, worse, shuts it down. (And, in fact, the criticizer is probably not using the face-value, lay definition of acquisition–see next post.)

Personally, I wish Krashen had introduced neutral terms such as ‘X-ing and Y-ing,’ or ‘flarping and bippling,’ and simply defined one as referring to one process and the other as referring to the other process. This would have been at least as clear, and probably more fun.

While I’m bummed, as a learner, teacher, parent, and human, that the term ‘learning’ has acquired(!) even a bit of a negative connotation, I know academic terminology is conventional, and I’m not calling for new terminology. I’m not about to start a revolution. I’ll keep seeking to understand and explain the differences between what Krashen and others mean by acquisition and what they mean by learning. And I hope that, regardless of the terminology involved, teachers and researchers can continue to improve not only how they talk about language, acquisition, and learning, but also how they talk to and about each other.