What is the role of students’ first language (L1) in a language classroom? This question is probably more controversial than the one about the use of the target language (TL), which I addressed in the last post. I’ve been asked several times in the last year to publicize my thoughts on L1 use in the classroom, and I finally have the zip to do it! 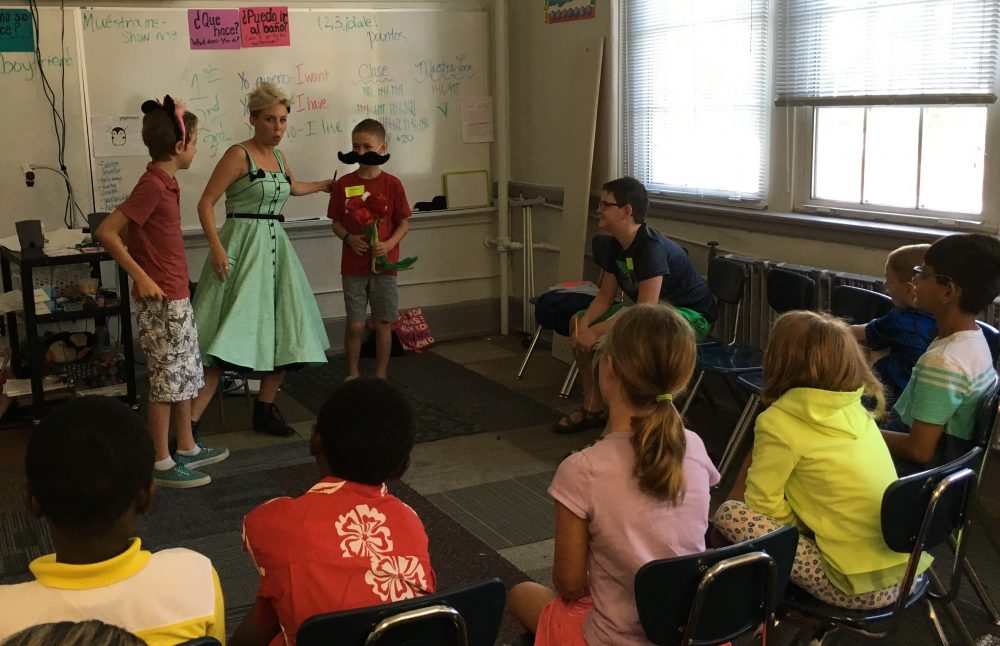 I’m not dogmatic about L1 use, except that I don’t think it should be used very much, not because doing so is bad in itself, but because doing so takes time away from using the TL, and we already don’t have that much time. That said, a little bit of strategic L1 can go a long way in enhancing time in the TL. So the main way I frame the question for myself is “In what cases is saying something in L1 an efficient use of time?”

Let’s get this one out of the way: if students’ bodies, hearts, or minds are being threatened by another student, an outsider, or nature, they and I should feel free to use L1. (My mother tells of a time in high school when her own French teacher, with ever-increasing urgency, exclaimed, “Appelez un médecin!” as students repeated the phrase louder and louder. Then the teacher keeled over unconscious. She really needed a doctor.)

Other than for emergencies, why might students or I use L1? In other words, when might using L1 be an efficient part of the proficiency-building and/or class-streamlining process?

1. If a task worth doing (in the TL) can be described or inspired quickest and with the least confusion in L1.

I’ve heard people say, “if you can’t describe the task/give instructions in the TL, then students aren’t ready for the task” or “if you have to explain it in L1, then the task isn’t worth doing.” These might be nice sound bites, but they aren’t logically necessary. 30 seconds of clear explanation and verification in L1 so that a 20-minute TL task runs much more smoothly than it would otherwise? No problem.

2. If students need a quick, stark reminder of a classroom policy.

Doing this in L1 creates a clear timeout to address the issue; the switch back into TL to return to the main interaction or task helps refocus the class. Note: With more proficient learners, L1 may not be necessary for policy reminders. Also, early in a course (in the first few days), L1 plays a greater role in my building rapport with students than it does throughout a course. Rapport continually cultivated in L2 plays a constant and crucial role throughout any course.

3. If a near L1 equivalent of a word or phrase is the quickest and clearest way of ensuring or verifying comprehension of TL content or a TL statement.

This is probably the most controversial one. Many teachers have a vague feeling that it’s bad in principle to give or ask for quick L1 equivalents. Some teachers have a more concrete conviction that it’s desirable for students to struggle to understand the TL. (This conviction is generally based either on the teacher’s own reflection that struggling for understanding helped him or her as a learner, or on general educational publications that posit “desirable difficulty” as, well, desirable, because it may require more complex processing that leads to longer-term retention. This is a legitimate possibility to explore, but language teachers who hold this view should be aware that, in holding it, they are aligning themselves with a particular view of language learning, far from universally held by SLA researchers, in which learning a language is fundamentally no different from building cognitive skills in general.)

Whether forced difficulty in language class is desirable or not, it needs to be weighed against three sacrifices that it often comes with: First, the sacrifice of the time it takes for students to figure out what is going on–time that could be spent processing more input or interacting. Second, the sacrifice of whatever else students may miss while they are trying to figure it out. Third, the sacrifice of comfort or buy-in that may result from a student’s inability to figure something out quickly enough. Discomfort isn’t a bad thing in itself, but we do need to decide (a) whether it’s a necessary part of the most efficient route to proficiency and (b) whether forcing difficulty so that students can “practice” experiencing difficulty is the job of a language teacher.

Some teachers worry that giving L1 equivalents may backfire because no L1 equivalent is perfect. But the same basic criticism can be leveled at any other approach–students’ guesses will be imperfect, TL definitions will be imperfect, etc. No matter what we do or don’t do to help students comprehend, their actual understanding of what a TL word, ending, or phrase means and how it is used will be gradually built up by numerous in-context encounters with that feature of the language. Except in old-school grammar-translation classes, no one is counting on an L1 equivalent to be what a student actually thinks of long-term when she encounters or produces the TL form or phrase.

Regarding “verifying comprehension,” asking one or more students to quickly translate or summarize a TL word or sentence using L1 can provide the teacher with valuable feedback and build students’ confidence.

4. For comments of supreme genius or supreme hilarity.

If students or I happen to think of an L1 comment that won’t work in the TL and that is sure to be of memorable genius or hilarity, we sometimes go for it. We have pretty high standards for genius and hilarity. When the supreme-genius-or-hilarity clause is invoked, we enjoy it, the good atmosphere is reinforced, and we either move on or make the idea part of our TL interaction.

That’s about it, though I’m happy to leave room for L1 use for certain tasks or interactions that teachers and learners have found work better that way. So, just a quick note on the How of L1 use:

As clearly and as briefly as possible.

It is usually possible to be much briefer than we think is necessary. It’s really easy to start explaining something in English and realize that a few minutes have passed. When I say “briefly,” I mean something like five to ten seconds. The exception is for explaining a complex task or procedure; even then, more than a minute seems long.

It can be hard

There are lots of legitimate concerns teachers have as they contemplate more and more TL use in class. I get it! I’ve struggled with issues related to my own proficiency, my personality, requirements I didn’t know how to meet while operating in the TL, and more. I view this post as a defense of using L1 wisely, not as a definitive list of a very few excuses for using L1.

What have you found to be efficient uses of L1? What worries you as you contemplate the balance–or changing the balance–of L1 and TL in your classroom?

NOTE 1: Since drafting this post, I became aware of Amy Lenord’s really well-put treatment of how class time spent in L1 can serve class time spent in the TL. Go read it! Also, Sara-Elizabeth enriched the profession with yet another dynamite post with relevance to L1 use and other hot topics in language teaching.

NOTE 2: Although in my regular classes my students and I use L1 in the above ways, I also design and teach in immersion camps where we use a variety of strategies to maximize the joy and success of participants who are specifically paying to be isolated from languages other than the TL.

NOTE 3: I know that, in some classes, students don’t share an L1. That calls for its own solutions, which I’m happy to discuss!