This is part 4 of my self-evaluations of my “Four Things to Be Relentless about in 2019,” which were Inclusion, Reality, Collaboration, and Positivity. You can read part 1 here, part 2 here, and part 3 here.

This is how I summarized Thing 4:

I’ve long had a mantra by which I remind myself to be relentlessly positive in tone and outlook, sometimes even repeating the phrase under my breath. This positivity is one of my most commented-on traits. (I’ve been happy to see the phrase used by others recently, too.) But attention to inclusion and reality can make positivity really, really hard. Makes sense, given how painful the issues involved can be. Still, I want the manner in which I deal even with these things to be a positive one that makes it easier for myself and others to change.

—Created a weekly a YouTube series of Tuned-In Teacher Mantras based on principles by which I try to teach and live, many of which are ways of encouraging myself and others. Examples include You Are What’s Best for Your Students, It’s Just Teaching, and Fake It = Make It.

—Ran an informal “encouragement campaign” on Twitter and in private messages. The combination of this and the mantras mentioned above somehow gave rise to a pattern of people asking me for in-the-moment encouragement or advice! (See pictures.) 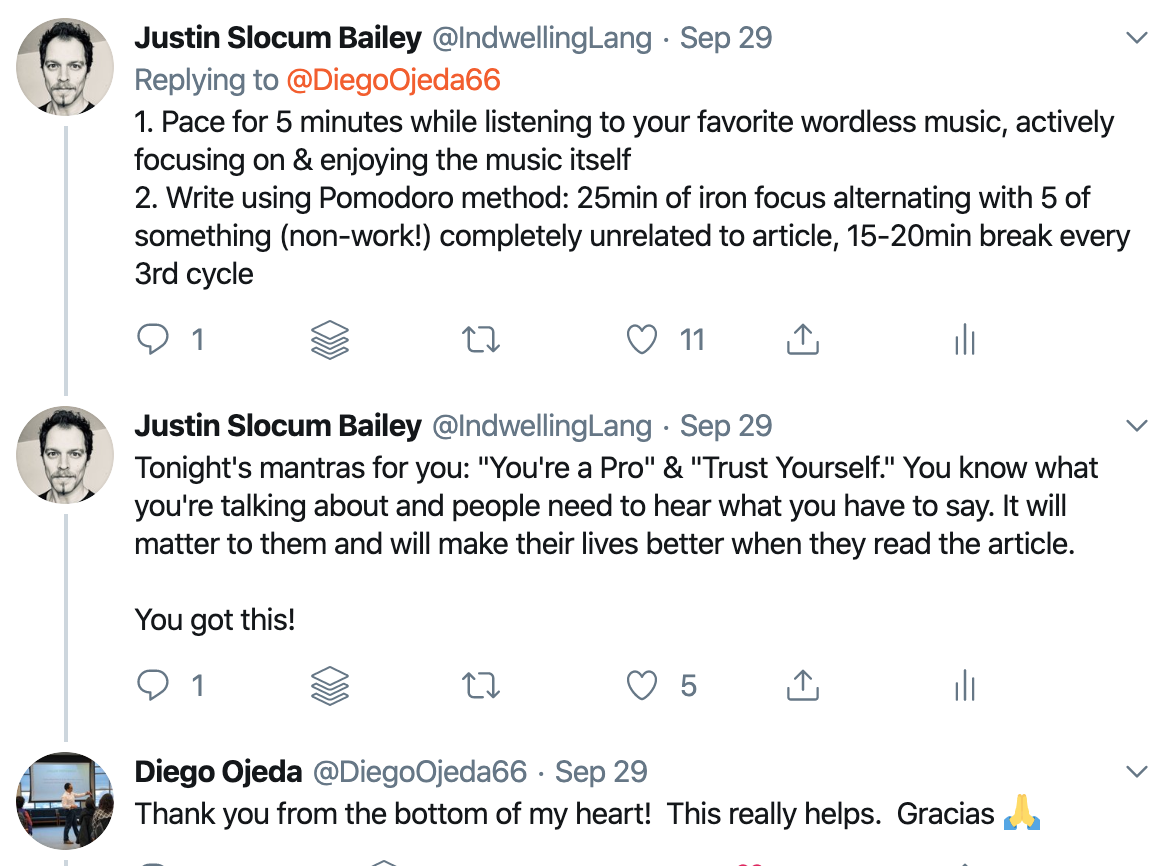 —Somehow maintained a collegial tone on social media, even in otherwise ugly threads about major issues. One observer of a particularly dramatic episode in November commented, “I really appreciate the way Justin Slocum Bailey ALWAYS engages in the most humane, calm, and ‘keep it rational’ way—even when engaged in a back and forth with Dr. XXXXX. I can’t say I’m surprised. I’ve literally NEVER seen Justin do otherwise, in person or online. Justin, I hope this doesn’t embarrass you, but I would say that your way of engagement is a Gold Standard for civil discourse. Just sayin’.” I felt affirmed by this because I wasn’t sure how helpful my contributions had been, and it motivated me to carry on.

—Continued a longstanding practice of re-writing emails and social media replies with an eye for tone, sometimes sleeping on a draft, sometimes running it by someone else. Others often came to me for insight into the tone of things they planned to post or reply.

—Practice positivity in my personal, inner life. Often I’m more positive outwardly than inwardly. It’s not that the projection is phony, but that I tend to find it easier to be positive toward others than toward myself. Especially when I’m alone and feel slammed by a series of setbacks, things get dark. Sometimes I’ve managed to turn even these times around for something positive, but usually I don’t, and it has taken its toll this year, especially this fall. Which leads to…

—Take my own advice, whether it’s the mantras or other ways of communicating or encouraging positivity. Often the mantra videos are timed how they are precisely because they are what I need to hear, but it’s still easier to encourage others than myself.

—When I would mentally review my four things throughout the year, I often couldn’t remember this one. While this may mean that I lost sight of it, more often, I hope (and think) that it was usually due to the fact that exhibiting positivity is such a given that I couldn’t even notice it consciously.

—I never want to sugarcoat things. Many things we deal with in work and in life in general are ugly, harmful, horrible. I don’t want to gloss over this and I don’t expect anyone to bear, much less sanction, suffering with an anger-less smile. I continue learning about situationally and topically appropriate forms of positivity, and what are the times and settings for sober responses.

Do you have any thoughts on positivity in the face of difficulty?